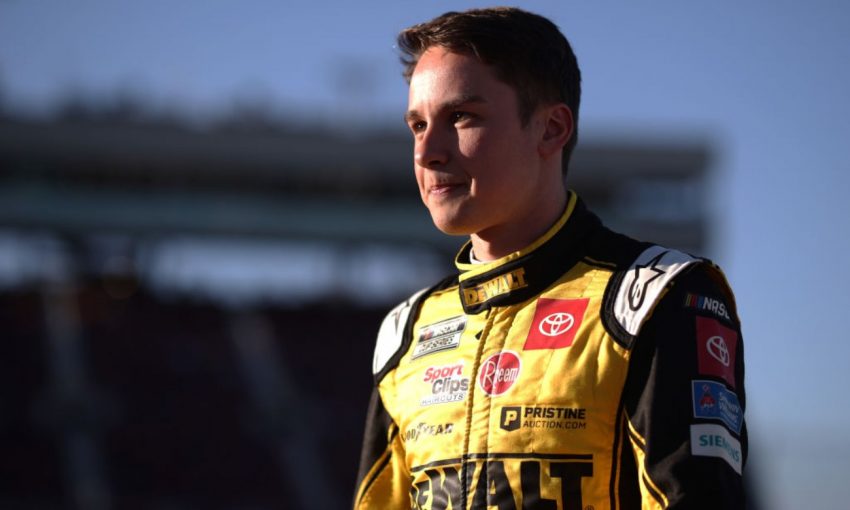 Bell (182.673 mph) set the fastest time out of the ten drivers who progressed to the final round of qualifying on the 1.5-mile oval on Saturday.

“I haven’t got to qualify very much in my Cup career, so I tell you what, that’s a hell of a lot more fun than qualifying the 550 (horsepower) package though,” Bell told Fox Sports.

“I feel really good about our (car), that’s for sure. In practice, it took probably two runs to get the balance where I was comfortable. But I knew our first run out, I felt like we were pretty competitive.

“I’m really happy with where we’re at. I love Las Vegas. I wish it was going to be a little bit warmer so we could slide around a little bit more, but Vegas always put on a great race.”

Kyle Larson had been the best in the previous practise session but was the last driver to make a run in qualifying’s final round.

Even while he couldn’t quite match Bell’s best, his lap of 182.014 mph was good enough to put him on the outside front row for Sunday.

Austin Cindric, the Daytona 500 champion, qualified third (181.794 mph), making it three top-five starts in a row to start the season.

On Row 2, Cindric will be joined by Chase Briscoe (181.733 mph). In his Cup career, his fourth-place starting spot will be his best on an oval.

Windy weather welcomed drivers and teams for Saturday’s practise session before to qualifying, just as they did last week at Auto Club Speedway.

Kyle Busch spun into the SAFER Barrier in the first minutes after getting a flat left rear tyre approaching Turn 3. His primary No. 18 Joe Gibbs Racing Toyota suffered significant damage in the rear end.

Kyle Busch will switch to a backup car on Sunday, according to JGR. He didn’t bother to try to qualify. The backup car was nowhere close to being race-ready, according to Fox Sports, as it was intended to be a “parts car” for JGR to harvest from during the West Coast races.

Larson was the fastest across 10 laps in terms of consecutive lap average speed, followed by Byron, Blaney, Alex Bowman, and Bell.