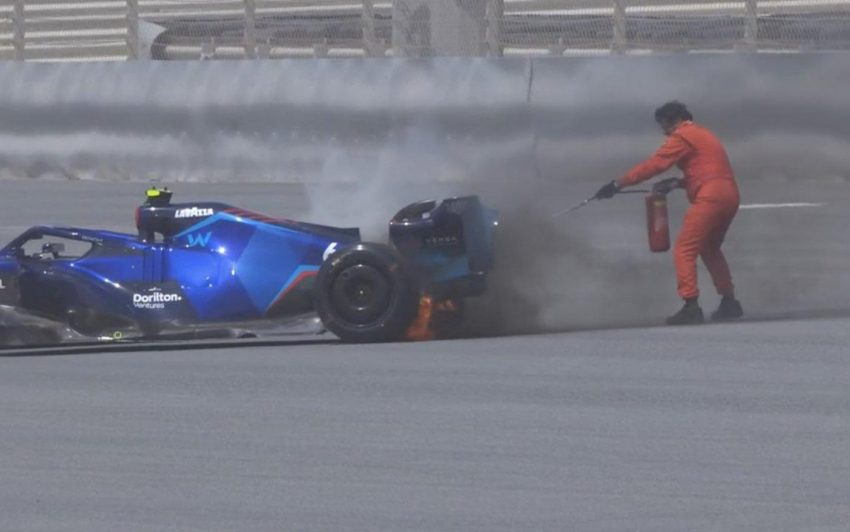 Early on Friday in Bahrain, Alpine’s Esteban Ocon set the pace, but there was drama at Williams when their car caught fire, forcing the race to a halt.

During Friday morning’s early testing activity in Bahrain, Esteban Ocon placed Alpine on top of the timesheets, but it was cut short when Nicholas Latifi’s Williams caught fire.

Shortly before the two-hour mark, Latifi’s rear brakes ignited in the braking zone for Turn 12, sending him spinning and bringing out the red flags.

The rear-left tyre exploded as flames consumed the car, allowing marshals to contain the situation with the help of an unharmed Latifi.

Ocon had set the best lap of the practise up to that point, clocking a 1:34.276 on the Soft (C4) tyre, while also wearing an all-pink Alpine livery.

The C3 Medium of Ferrari’s Charles Leclerc was little under a tenth off the pace in P2.

McLaren has more troubles than Aston Martin in terms of mileage

Sebastian Vettel of Aston Martin was perhaps the most successful driver before the red flag, completing 35 laps, while Red Bull’s Max Verstappen (26) and Ocon (24) had similarly successful starts to their races.

Verstappen finished third, a second and a half behind Leclerc, on the Hard C2 rubber, with Alfa Romeo’s Valtteri Bottas (C2) and AlphaTauri’s Yuki Tsunoda (C3) finishing top five.

After their brake troubles on the first day, McLaren ran even further trouble on Friday, with the issue appearing to remain.

Lando Norris replaced the ill Daniel Ricciardo for the second time – McLaren confirming that the Australian has not tested positive for COVID-19 – and was only capable of completing six circuits in the first two hours.

The session will resume at 12:16 local time once Latifi’s automobile has been removed (09:16 GMT).