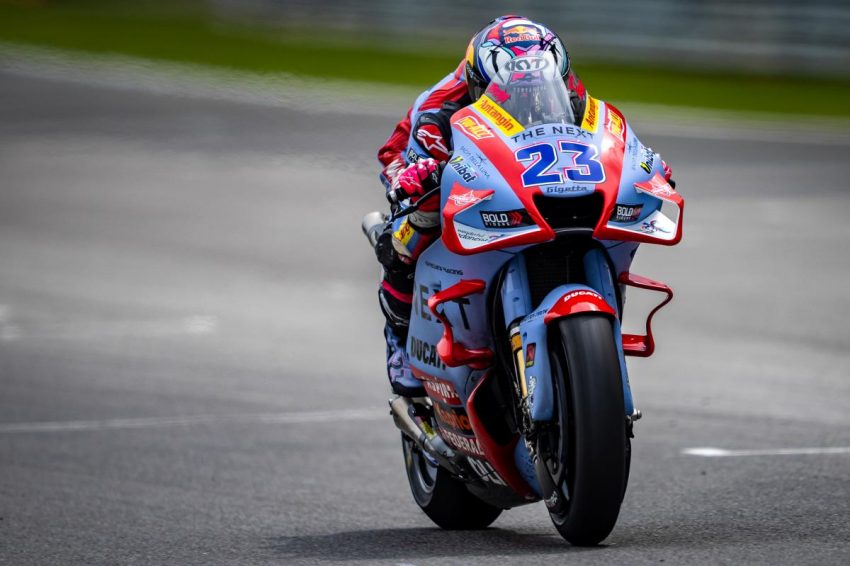 After setting a new unofficial lap record, Enea Bastianini is the fastest rider in the Sepang MotoGP test.

Enea Bastianini’s incredible performance on the Desmosedici GP21 continued at Sepang, when he set the unofficial MotoGP lap record.

Bastianini, who was already the top Ducati rider after clinching P4 on day one, set a blazing time of 1:58.131s to finish first, 0.026s ahead of Aleix Espargaro.

Despite being only his second day on the new bike, the Gresini rider was a full tenth of a second faster than Danilo Petrucci in 2019.

“Expecting to be first today, no! But to be fast, yes! When I tried this bike for the first time here I have seen a very nice potential,” Bastianini answered when asked if he expected to challenge for first place and so be as quick as he was.

“Also in Gresini, the team is working very well. It’s incredible. Here in Malaysia we have worked a lot from yesterday and we have stayed fast from the start.

“Today we have done one time attack and I’m in first position. This is incredible for all the team, but it’s only the test. We now have Mandalika which is a new track for everybody which will tell us more.”

Bastianini feels the 2020 Moto2 champion might have gone even faster if he hadn’t made a small mistake at the penultimate corner, which cost him the first ever 1m 57s lap.

“I wasn’t happy because I went long (wide) in the last corner [laughs] and I was +0.3 and it was a little bit close,” said the Italian. “Without that the 57 was very close. It was possible. But I haven’t done it.”

Bastianini, who has already claimed two podiums as a rookie, is in a strong position to fight for race wins in 2022 after switching from the less preferred GP19 to GP21 package.

When discussing the differences between the two bikes, Bastianini mentioned that the 21 package is considerably more ‘constant’ and easier to ride: “The 21 bike compared to the 19 is very easy to ride. The bike of last year; I always had a lot of (arm) pump in all the tracks, also a lot of shaking in the straight,” said Bastianini.

“All the free practices on the bike were different. This bike, every time I go outside it’s the same and also it’s more constant, it’s faster and you can make errors but it remains stable.

“When I see the data, when I see Jack [Miller], Pecco [Bagnaia] and Jorge Martin, I have to improve in the middle of the corner because always my style is to be fast, I’m aggressive to enter the corner, but with this bike the potential is the power and I have to be faster in the exit of the corner.”